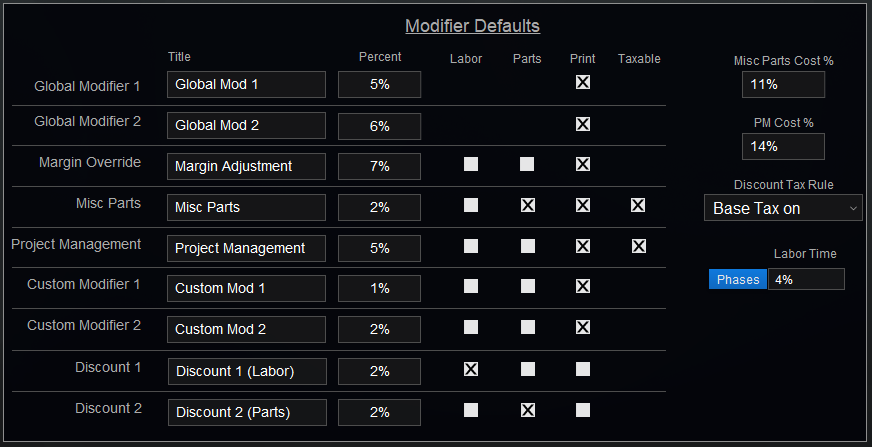 Proposal settings affect both Proposals and Sales Orders since a Sales Order is an approved Proposal.

The first section is where default Modifiers are set. A default modifier will automatically be applied to any new proposal but can be adjusted on the Info tab of the proposal itself.

A Modifier adds an additional charge in the subtotals section of the proposal based on various criteria. There is a setting available when printing the proposal to include the modifiers in each line item as appropriate. So a 5% parts modifier, for example, would be added to each part individually rather than just a subtotal at the bottom of the proposal. This option is available on the Proposal by clicking Client Proposal > Options (button) > Advanced (tab) > Show Modified Prices.

Each modifier has several options available.

Let’s look at these modifiers in more detail:

!In order for modifiers to push correctly to QuickBooks, they must be set up in Settings > QuickBooks > Chart of Accounts.

At the far right of the modifier window are a few extra settings.

PM Cost % This field works exactly the same was as the Misc Parts modifier described above, except that it is calculated on the Project Management percentage.

Discount Tax Rule defines what tax rate is associated with the Discount fields.

Labor Time is a modifier that increases the amount of time quoted on a proposal.

Clicking the phases button will open a list of the Labor Phases defined in your system. Each labor phase has a checkbox next to it so you can select one or all of the phases.
Then, in the field next to the button enter a percentage to increase the labor time on proposals by that percentage.
Let’s assume you selected the Prewire labor phase and entered a 50% Labor Time modifier. On your proposal, you have quoted 1 hour of Prewire and 1 hour of Trim labor. Because of this modifier, the proposal would be updated to reflect 1 1/2 hours of Prewire but maintains the 1 hour of Trim labor. This adjustment is done on an item by item basis, so each time the Prewire labor phase is included, that time would be adjusted.

Across the bottom of the Proposals window are a series of tabs that control various aspects of Proposals and Sales orders.

Navigate to each of the following tabs by clicking on the link below or choosing the tab name from the menu to the left.