The sales Pipeline helps management and sales staff to understand the likelihood of future business. The Pipeline is comprised of Deals or potential jobs. Deals are ranked based on the probability of that job coming to fruition.

Once a Deal is accepted, it becomes a Job underneath the customer and appears in the Customer list as a child job to the parent customer, in much the same way as a builder will have multiple construction lots displayed under the parent customer.

A Deal is treated like a Job in that it can have multiple proposals and sales orders associated with it. 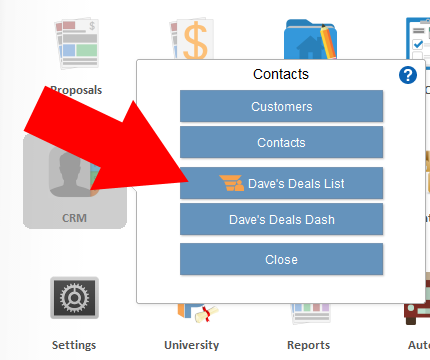 3. Find the orange Deals icon on a Job name from the customer list and click on that.

4. Open a Customer record and click on the Deals menu

*Note that the Deals name might be different in your iPoint because it is a customizable name in Settings > Module Settings > CRM. Selecting Deals from the CRM module displays a list of all the active deals in your system. The navigation bar across the top will look similar to you, as it is the same options visible on the customer list. A complete description is available here

Use the search filter at the top of the page to find a specific deal in the list, especially useful when a customer has multiple deals.

The green New Deals button will create a blank deal for this customer. A Deal looks very similar to a customer or job with the exception being the deal carousel across the top of the screen. This carousel contains the details used to report on a company’s pipeline. Some of these fields are the same as found on a standard customer record but have been moved here to consolidate Deal information.

The remainder of the Deal Details are the same fields used in creating a new customer or job. Specifics about each field are available in the CRM > Contact Details portion of this manual.

iPoint Version: 10.0305
Last modified: 8 Mar 2021
Subscriptions
Completing a Deal
Thanks for your feedback.