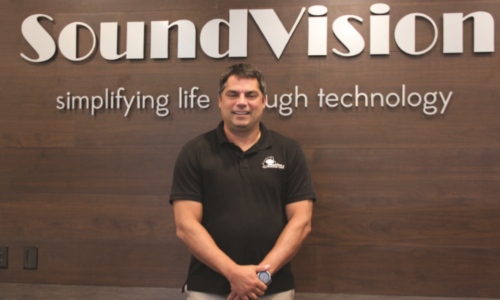 Mark DiPietro of SoundVision in Mooresville, N.C., changed software every two years before discovering iPoint four years ago. “I guess I just wanted to waste money,” he jokes.

Unfortunately, software can sometimes be a revolving door for integrators. You try one for two years… it doesn’t work so you try another one. Two years later that one is discarded and it’s time to try another one.

Mark DiPietro, managing partner at SoundVision in Mooresville, N.C., just north of Charlotte, admits he was one of those integrators.

“I was stupid. I guess I just wanted to waste money,” he chuckles.

“For many years, I was more involved in wearing multiple hats on the business. I was doing the proposals, ordering, and scheduling in a lot of cases. I was trying to find one software that did everything exactly the way I wanted it. I don’t know if that software actually existed, but I don’t do that anymore.”

DiPietro doesn’t do “that” anymore because now he has iPoint, the end-to-end software solution he adopted about four years ago.

SoundVision has been in business for more than 9 years and today sports 16 employees. The company does a wide range of both commercial and residential projects, with its average residential job around $29,000. At any given time, the company might have seven to 11 six-figure projects in the works simultaneously.

“I’ve always searched for the software. I’ve used D-Tools, Horizon, Simply Reliable, and BidMagic. I have even used Microsoft Word and Excel as well throughout all that time. They all worked good and allowed us to do things quickly and efficiently, but I needed software that tied everything together that could provide me with the financial matrix information on the fly that I need to actually base business decisions on. We wanted a workflow solution and iPoint provides it,” he says.

With the software, SoundVision is able to integrate that financial data with proposals, work orders, scheduling, inventory and QuickBooks accounting.

Using iPoint for proposals has been especially effective for DiPietro. He estimates that prior to using iPoint, his design team would spend four to six hours to create a proposal for an under-$30,000 job. With iPoint, they can crank it out in less than one hour. The same is true for larger proposals, which can now be done in four to six hours versus multiple days.

“More importantly though, we don’t want our designers spending time doing proposals. We want them on appointments with customers. Our goal is to never have a proposal take over 48 hours, with the exception of huge ones. Anything under $30,000 is out the next day 99% of the time,” he says.

And the proposals themselves are high quality. DiPietro says the company has a 95% close rate on any proposal between $7,000 and $30,000.

The real-time data generated by iPoint also helps DiPietro stay on top of labor profitability for every project. He spent years creating a system whereby he can accurately calculate his labor costs on any given project. iPoint allows him to see those calculations in real-time.

“It gives us a really good understanding of whether we want to take on a project and realize the job profitability. With iPoint, it is all in a matrix… all the numbers are right there,” he notes.

Two of DiPietro’s favorite aspects of the iPoint software are the notifications and the product tracking.

“We use Slack as our internal communication system. We rarely text or email each other. iPoint has wonderful integration compatibility with Slack,” he says.

In terms of the equipment tracking capabilities, using iPoint the company can track a product from the purchase order to an individual van to the jobsite. Nothing gets lost in the ordering, staging or delivery phases.

DiPietro recalls one incident previously where four staff members spent over one hour searching for a missing Apple TV.

“It was this ridiculous odyssey over a $180 device. It was stupid, but that’s what we did. That was the genesis for us to know there had to be a better way,” he recalls.